Back to Patient Education

Anorexia nervosa is a type of eating disorder. People with eating disorders have problems with their eating behavior, thoughts, and emotions.  They have a distorted body image and attempt to control their weight by controlling their food intake.  People with anorexia nervosa barely eat and are underweight.  They think they are too fat, when in fact, they are too thin.  Untreated anorexia nervosa can result in serious medical complications, starvation, and death.  Treatments include therapy, medication, hospitalization, or a combination of treatments.

The exact cause of anorexia nervosa is unknown, but eating disorders are a real illness, not a choice, and can be treated.  Researchers believe that it is caused by a combination of many factors.  People with anorexia nervosa commonly have low self-esteem, goal oriented personalities, and are high academic achievers and perfectionists.  They may also have a history of sexual abuse. People with anorexia nervosa tend to have rigid thinking patterns, meaning that they perceive things to be “black or white” or “all good or all bad.”  They may perceive pressure from society, family, or friends to be thin or equate a thin body with ideal attractiveness.  However, even extreme weight loss fails to relieve the fear of being fat.
The family environment may play a role as well.  Family conflict, over-controlling parents, and parents that do not allow emotional expression may contribute to anorexia nervosa in a child.  A possible theory is that anorexia nervosa is a way for a child to gain control and pull away from his or her parents.  Controlling food intake may be used as a coping mechanism for negative emotions.
Researchers believe that brain abnormalities may contribute to anorexia nervosa.  It may be that too much or too little of certain brain chemicals affect the way that the brain processes thoughts and emotions.  Researchers think that some people may be genetically predisposed to eating disorders, meaning that they inherit a risk of developing the condition under certain circumstances.  Further, obsessive compulsive disorder (OCD), anxiety, and alcohol or drug addiction may contribute to the development of anorexia nervosa.
Anorexia nervosa is more common in females than males.  It most frequently occurs in teenagers and young adults, but may develop in children.  Some people recover after a single episode.  For others, anorexia nervosa is a lifelong battle.
Back to top

The symptoms of anorexia nervosa can vary from person to person.  People with anorexia nervosa do not eat enough food and experience a weight loss of 15% or more below their appropriate weight.  The lack of nutrition and weight loss may be extreme.  Essentially, they are starving themselves.  Additionally, depression, anxiety, panic disorder, obsessive compulsive disorder, or substance abuse may accompany anorexia nervosa.

A person may play with their food, hide food instead of eating it, or not eat in front of others.  Eating may involve structured rituals, for example eating only 5 peanuts at intervals throughout the day.  People with anorexia nervosa may abuse laxatives, diet pills, enemas, or make themselves vomit after eating.  They may also exercise excessively to burn off calories and frequently check their weight.

People with anorexia nervosa lose body fat and muscle bulk.  Females may have infrequent periods or stop menstruating.  Males may become impotent.  The skin may appear blotchy, dry, and yellow. Fine hair may cover the body. Self-induced vomiting can cause tooth decay and gum disease.

A psychiatrist can begin to determine if a person meets the diagnostic criteria for anorexia nervosa.  A complete medical examination is usually necessary to rule out other disorders that may cause significant weight loss and to evaluate the general health of an individual.  A psychiatrist can specify the subtype of anorexia nervosa that a person has, which is helpful for treatment planning.

People with the restricting subtype of anorexia nervosa attain weight loss through dieting, fasting, and excessive exercise.  These individuals do not usually binge or purge.  People with the binge-eating and purging subtype of anorexia nervosa regularly binge eat, purge, or do both to lose weight.  Binge-eating entails eating abnormally large amounts of food.  Purging involves eliminating the food from the body after eating it by self-induced vomiting, laxatives, diuretics, or enemas.  Some individuals with this subtype may not binge-eat, but may purge after eating only small amounts of food.  Overtime, some people with the binge-eating/purging subtype may progress to a change in diagnosis to bulimia nervosa.

Treatment can include participation in inpatient or outpatient individual therapy.  Group therapy settings or day programs for people with eating disorders can address self-image, self-esteem, positive coping skills, structured meal plans, and healthy eating and exercise.  Family counseling is helpful to identify and resolve conflicts.  Medications may be used to treat depression, anxiety, and obsessive compulsive disorder.  People that are in danger from starvation may require immediate hospitalization to restore weight and fluids.
Recovery from anorexia nervosa is different for everyone.  Some people recover after just one episode.  For others, it can be a life long battle that requires ongoing counseling, support, and nutritional management. Positive support from loved ones can be essential for an individual’s success.  It is important to remember that anorexia nervosa is a real illness that can be treated.
Back to top

This information is intended for educational and informational purposes only. It should not be used in place of an individual consultation or examination or replace the advice of your health care professional and should not be relied upon to determine diagnosis or course of treatment.

Before and After Gallery 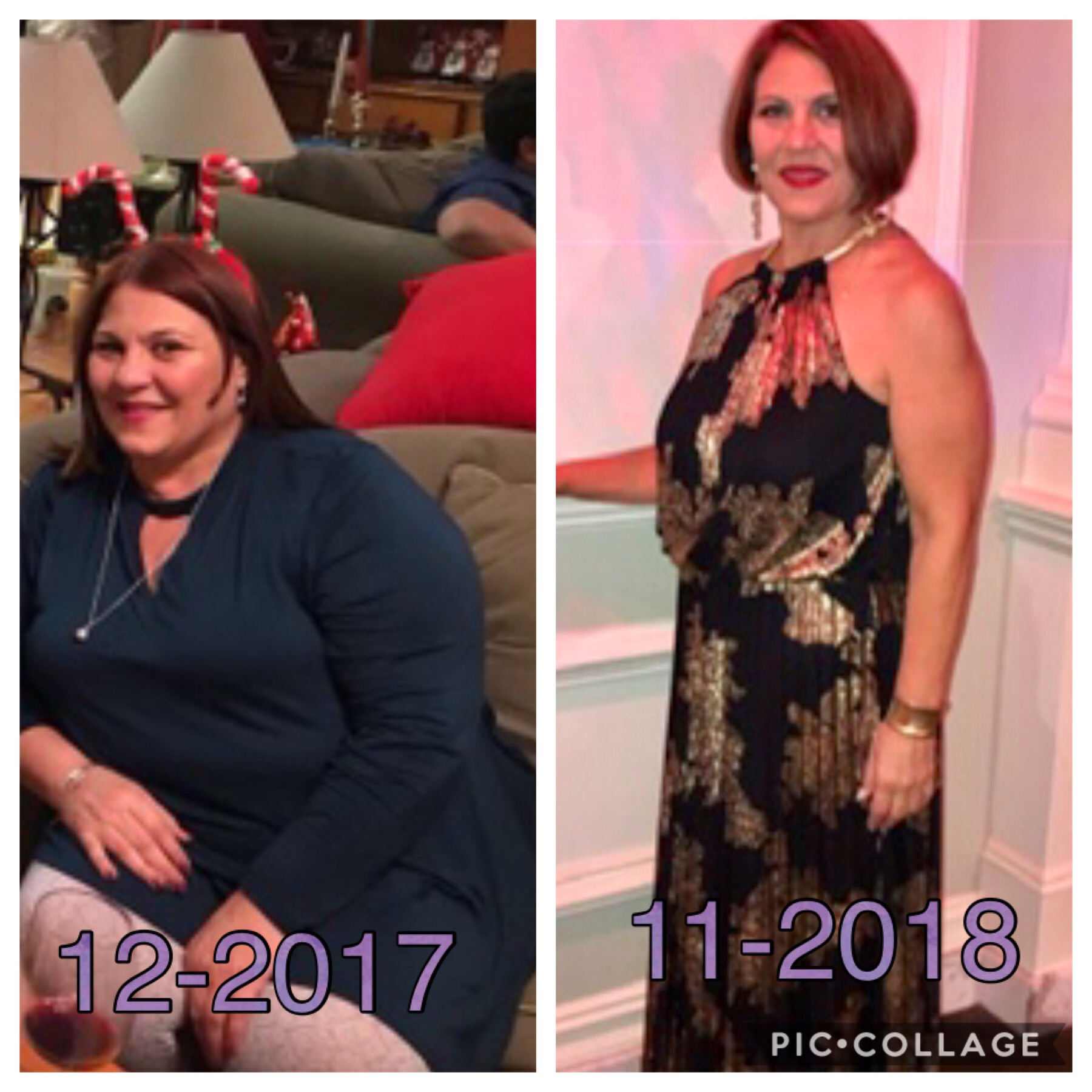 I just had my surgery with Dr. Whittwell 10 days ago and I feel amazing. I lost 10 lbs. already! A total of 29 since I started this journey in January. Dr. Whittwell and his staff are so professional and caring. They want to make sure you succeed! Do it! Change your life! Go see Dr. Whittwell! Thank you, Dr. Whittwell!
Esther in Miami, FL | 05/12/2018

Get the latest information on bariatric and general surgery procedures. 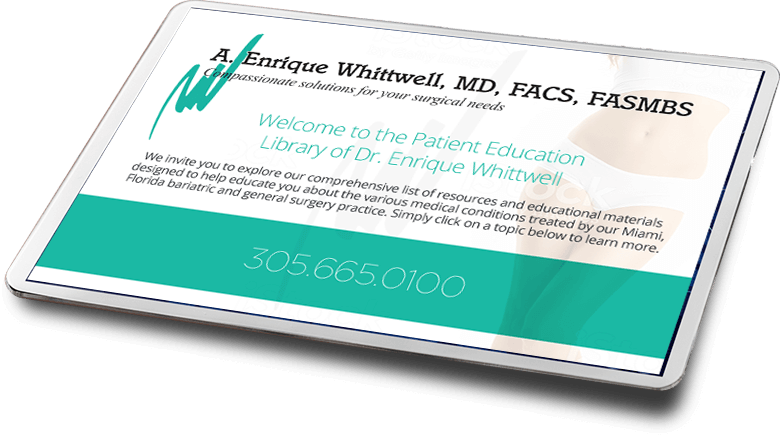 A. Enrique Whittwell is a board certified general & bariatric surgeon. Offering weight loss, bariatric,  robotic and laparoscopic procedures. Some include but are not limited to gastric balloon, Lap-Band Surgery, Sleeve Gastrectomy , colon resection, gallbladder surgery and others